skip to main | skip to sidebar

How the mighty fall 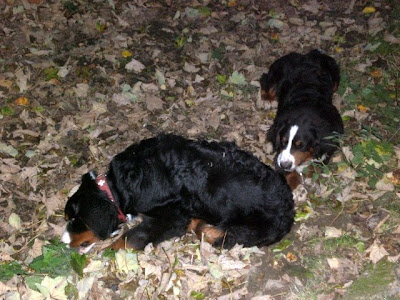 It was not so very long ago that this young pup could look forward to pigs ears from Harrods, things are slightly different at Rock HQ. He has fitted in well with his siblings and here he is chewing away on part of a horses hoof after we had the boy's and Misty's feet trimmed by the blacksmith. For some reason the dogs love the clippings. 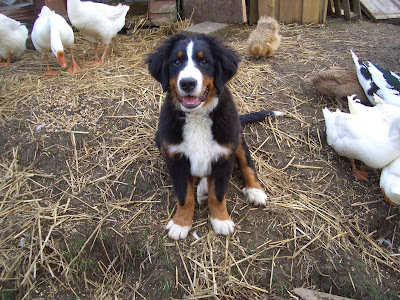 Another picture of Rocky our oldest Berner, now three years old, as a puppy. Unlike his offspring he was/is very well behaved around poultry. 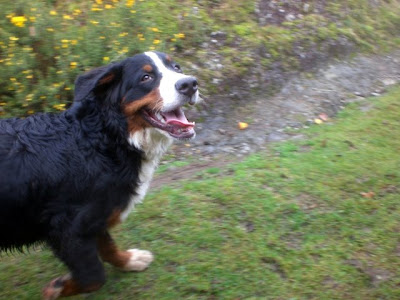 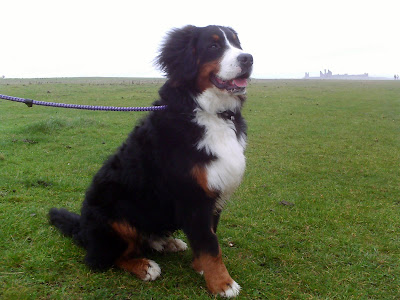 Here are two fab photo's of Harvey, who was RockyII, not to be confused with the real Rocky2 who used to be Spot, come on keep up, anyway here is the handsome chap on his hols with his owner Abbey. He really is a stunning dog, the boys are obviously bigger than the two girls we have. He has also won a major competition as most cutest puppy in a Horse and Pony magazine! Top dogs the Dolyhir clan! 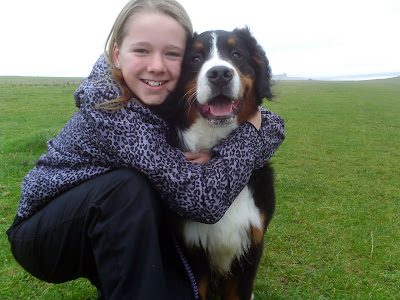 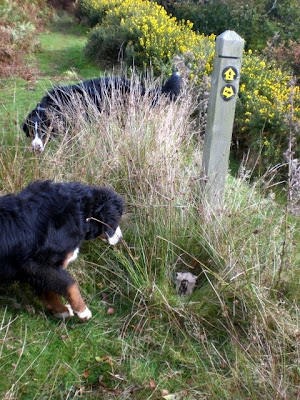 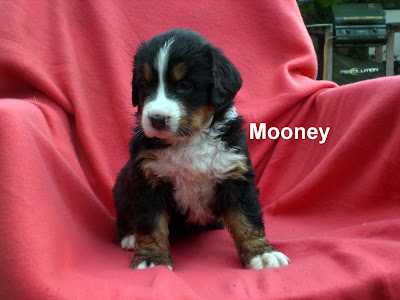 Liz has asked for news on all eight pups so here goes! Mooney, she became Brooke and is doing really well, there are a few pictures of her on the blog sent by her family. 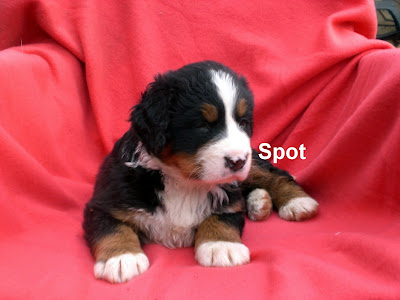 Spot, he was the largest of the boys and it was really hard to let him go. He went to a lovely family over Surrey way and they named him Rocky (after his Dad) They totally adored him and he was a very pampered pooch. Life changes unexpectedly and for them they had to move to Dubai. Thankfully they got back in touch with us and gifted him back as they couldn't take a Berner to that climate. It was such a hard decision for them and it caused them great upset. He is now back with us, called Rocky2 or Spot, depending on how urgent it is to get him to listen! He is a great big softie, and so clean! 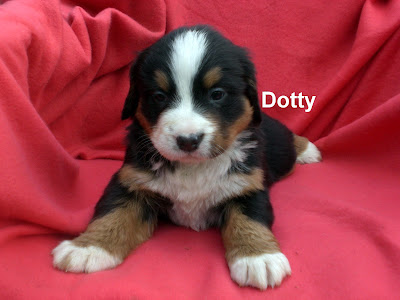 This little rascal we decided to keep as she looked different to the others and then lost the hair from her tail. She is different, the dirtiest Berner ever, her hobbies include digging in mud, sitting in stagnant ditches and standing in ponds. 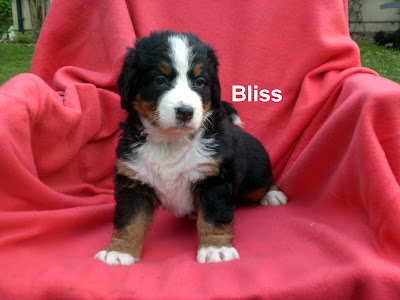 Bliss is with us and is the opposite to her sister, she stays clean, most of the time. I do have plans to show her, we shall see how that works out! 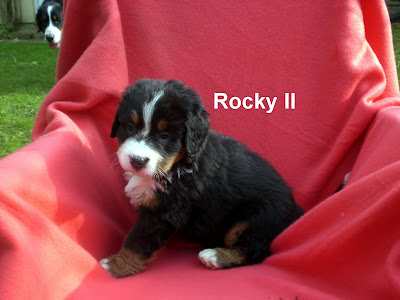 This is RockyII aged 4 weeks, he became Harvey to his new family. 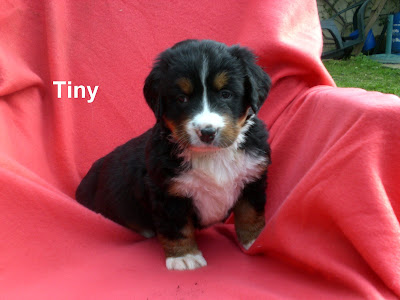 This is Tiny, we have yet to hear from her new family, we hope they are ok. 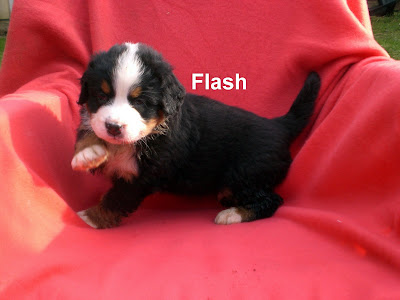 This handsome lad became Bear and lives a very happy life in Ireland, by now he has probably been on TV! 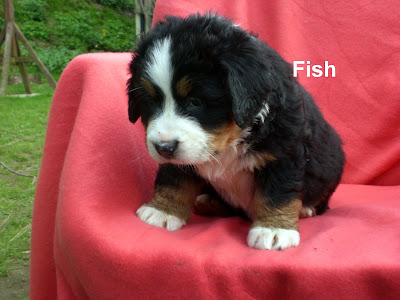 Liz, who gave Fish a lovely home asked for pictures of all the pups and their new names for a photo album. Fish became Fizz and recently came 3rd in a photographic competition, the portrait of her is on this blog posted a while ago. Its been really nice hearing from the owners who have let us know how the pups are getting on. When we track Tiny down we will let you all know how she is.

Dotty proving she is the dirtiest Berner of the Dolyhir Clan! 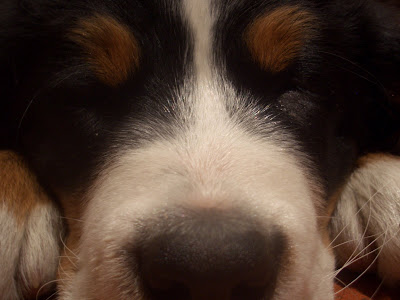 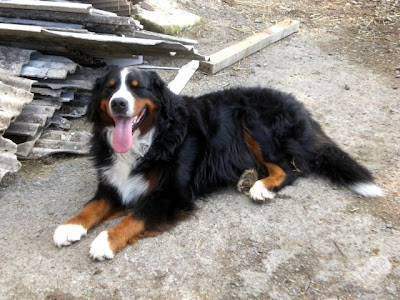 Rocky doing what he does best, taking it easy

You want to sit where? 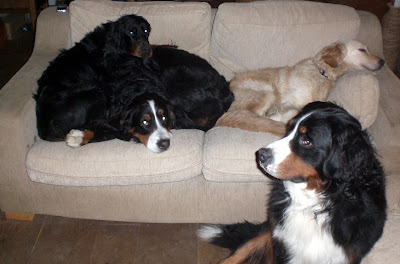 Finding space on the sofa at Rock HQ is a constant battle!

Rocky2 is learning the country code after spending so long in suburbia. Here he is beaten by a stock fence while his dad Big Rocky manages to get under it without any bother. 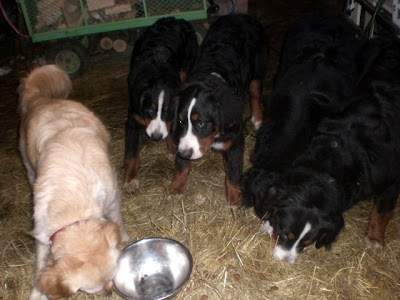 Poppy the Golden Retriever letting everybody know that the spilt biscuits are hers! 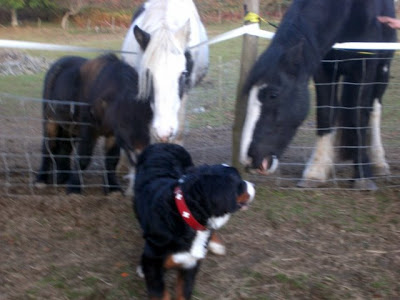 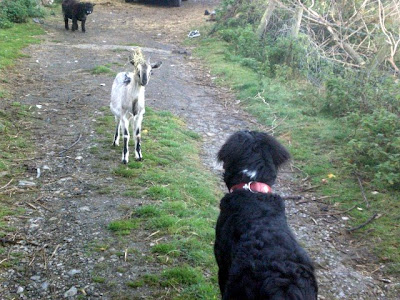 Archie and Rocky2 meeting in the lane and sizing each other up, Ebony in the background about to lend support to the vegetarians. This was taken yesterday morning, see www.talesfromtherock.com to find out what happened to the goats at Rock HQ.

Rocky 2 met Misty the fiesty little Shetland Pony, I don't think its an encounter he will forget! Poor lad! 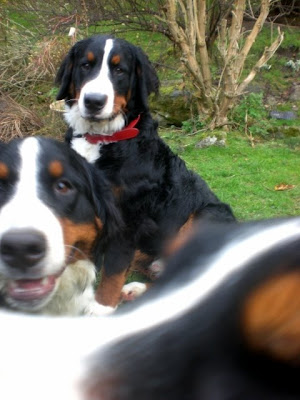 This handsome Berner called Rocky rejoined the clan at Rock HQ today as his family are moving to Dubai to live. They very kindly gave him back to us so he could live with his mum, dad and sisters. It must have been a really difficult decision to give up such a lovely dog. He soon recognised Reba and the rest of the clan and has spent much of the day playing in the garden and exploring Rock HQ. As we suspected he is bigger than our two pups, cleaner and and extremely well behaved. I tried to get a family portrait type picture in the garden but as you can see only he sat quietly, the others rushed the cameraman! 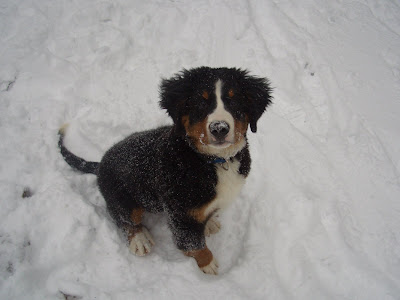 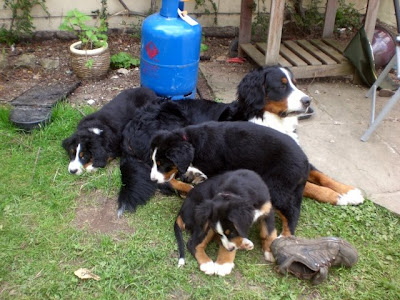 These three pups are soon to be reunited at Rock HQ. Dotty at the front and Bliss are going to be joined by Spot, lying down at the back, who is being returned to Rock HQ as his owners are moving abroad. He is going to be made very welcome and suspect he is a bit bigger and definitely better behaved than our two! 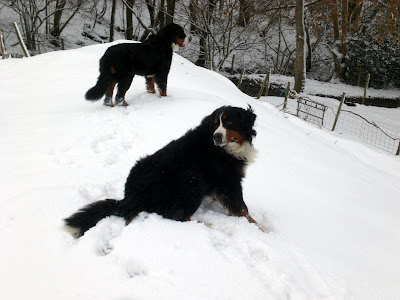 Heres how they should look 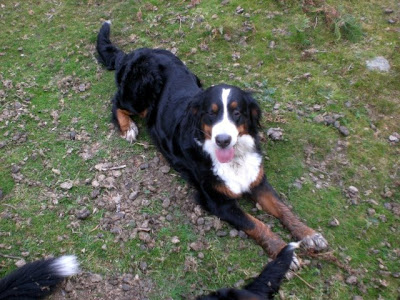 Reba looking on as Dotty coats herself in mud, I prefer the black glossy coat of Reba to the foul smelling green of Dotty! We were really worried about Dotty yesterday though, she got stung/bitten, firstly we thought a wasp, then latterly an Adder. She span round in circles after playing in the brambles and bracken, biting her side. Then she fell over writhing about scratching her right side, threw up and started shaking. By the time we got to her her heart rate had gone through the roof and she was a very poorly dog. We checked on her through the night but by 5am all was well as she was in a barking competition against the goats and her appetite had returned as she ate the pig feed. Dogs eh? Almost as bad as kids! 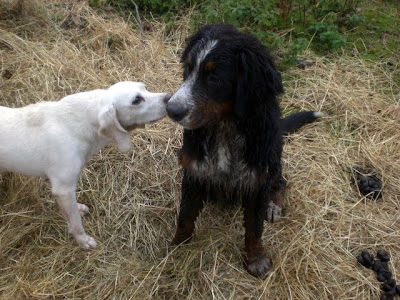 Preston checking to see if under all the mud that there is an actual Bernese Mountain Dog.

You might wonder how long it takes to turn a Bernese Mountain Dog puppy into a show winning dog.

As far as Dotty is concerned, hours and hours, and that's just to get rid of the smell! Her she is playing in the mud pits of The Cauldron, a very boggy place at the best of times, but if you look carefully you can find some extraordinary mud to sit in, or in Dotty's case, dive head first into!

Hes a big one! 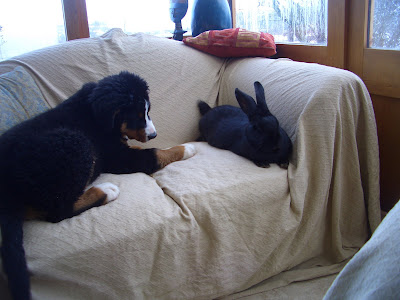 Rocky on the sofa with Manny the giant bunny 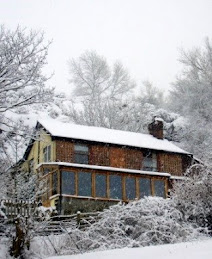